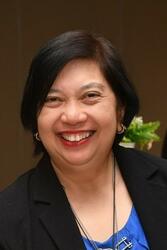 Ms. Maria Fe Nuestro Ferriols has more than 40 years of experience in the field of Information Technology (IT) Consulting. At present, she is the President of Corelate Inc., an IT Solutions provider that is in the business of offering various IT products and services with its orchestration platform innovation. She has worked in the private and government sectors in various capacities as an IT business executive, IT consultant, IT solutions integrator, sales and marketing executive, project manager, systems analyst, programmer, educator, and student. Her friends and colleagues in the academe and industry call her Fe.

Fe's IT career has been supported by her active participation in various socio-civic organizations. Besides teaching on her free time, Fe was the founding President of the Philippine Society of IT Educators in 1998, now the largest IT organization in the country with chapters in all 17 regions. She is currently the Treasurer of the Philippine Thai Cultural Organization, having been its founding Secretary in 2009. She is a Board Director of the Balik Kalipay Center for Psychosocial Support, Inc., providing trainings on mental health and psychosocial support (MHPSS) to corporate clients as well as Overseas Filipino Workers (OFW). She is also a Board Director of the Philippine Institute for the Deaf, teaching deaf children to talk and be integrated into normal environment, being hearing impaired herself.

Fe has attended the Executive Program at Darden School of Business, University of Virginia (UVA). She has earned an MS degree in Computer Applications at the Asian Institute of Technology (AIT) after she took her undergraduate degree in BS Statistics at the University of the Philippines (UP).

As a scholar of the Australian government in AIT in 1980-82, Fe was an active student, having been the first woman to win an elective position in the AIT Student Union as its Secretary-Treasurer. She was the student division representative of the Computer Applications Division to the AIT Faculty-Student Liaison Committee (AIT-FSLC). She was one of the first two student representatives to the AIT Academic Senate (AIT-AS). She carried the voice of the AIT scholars in these prestigious fora.

Fe is an active alumna of AIT. She was a recipient of AITAA Distinguished Alumni Award for Business in 2017. Prior to that, she was a Board Director of the AIT Alumni Association (Philippine Chapter) wherein she was a past President, Vice President, and representative to the AITAA Governing Board. She has attended the past AITAA Governing Board Meetings (GBM) held in Bangkok, Kathmandu, New Delhi, Dhaka, Seoul, Siem Reap, Yangon, Taipei, Jakarta, and Manila.

Fe started her AITAA Presidency in January 2018, having been elected during the 46th GBM in Taipei, Taiwan. As the 17th President of AITAA, she is the first President to live outside Thailand and has actively used technology to reach out to all chapters of our association. She is the voice of the alumni in AIT's Board of Trustees.

It is her pride and honor to join the AIT Extension Advisory Board.