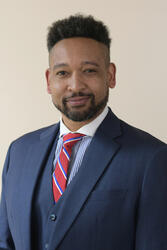 Assuming the role of Executive Director of AIT Extension on January 1st, 2021, Dr. Garnier has a track record of delivering innovative, transformative and results-focused initiatives to multiple international entities.  As a progress-driven educator, motivational leader and tireless student advocate with a passion for empowering and supporting academic communities around the world, Dr. Garnier has extensive and unparalleled leadership experience that spans roles in the military, government, business, higher education and nonprofit sectors covering the United States, Middle East, Asia Pacific and Europe.

Dr. Garnier’s additional roles for the Asian Institute of Technology (AIT) include Affiliated Staff Instructor for the university’s School of Management where he teaches graduate students the course he created entitled, “Developing Leadership Skills”, he also was elected and serves as the staff representative to AIT’s Board of Trustees.

Prior to his work in education, Dr. Garnier rose to the rank of Captain in the US Marine Corps earning 6 Air Medals and multiple other honors as a combat helicopter pilot flying numerous missions throughout the Middle East to include both Iraq and Afghanistan.

Dr. Garnier earned his Doctorate in Global Education from the prestigious University of Southern California. He also holds a Master of Arts in Teaching from USC and a Master of Science equivalency in Aeronautical Engineering from the United States Navy; his undergraduate work was completed at the University of Hawaii – Manoa, where he attended on a full athletic American football scholarship and was elected the President of the university’s student body representing nearly 20,000 undergraduates.

As a globally astute, innovative and results-focused pedagogue, consultant, international lecturer and parent/student rights advocate, Dr. Garnier has traveled and lectured around the world in order to educate, examine and enhance his knowledge of global educational ingenuity and its impact and relationship to bold and transformational leadership.